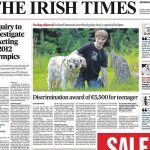 The Workplace Relations Commission has awarded Luke Kelly, 17 year old from Co. Meath damages after his former primary school discriminated against him on disability grounds by refusing to allow him to bring his assistance dog to school when he was a sixth class pupil. In the ruling, which was the first of its kind involving an assistance dog in a school, the Commission ordered the school to redraft its policies and to report to the Irish Human Rights & Equality Commission (IHREC). Aisling appeared on TV3 news to discuss the case.